Bitcoin Technical Analysis: BTC Struggles With The Stubborn Resistance At $14,000

Bitcoin rejected from levels slightly above $14,000 again, leaving a gap to be explored by the bears. BTC/USD must defend the support at the 50 SMA and the ascending channel’s middle boundary to keep the uptrend intact. Bitcoin price retested $13,200 support on Tuesday in the wake of the news that cryptocurrency exchanges operating in The post Bitcoin Technical Analysis: BTC Struggles With The Stubborn Resistance At $14,000 appeared first on Coingape. 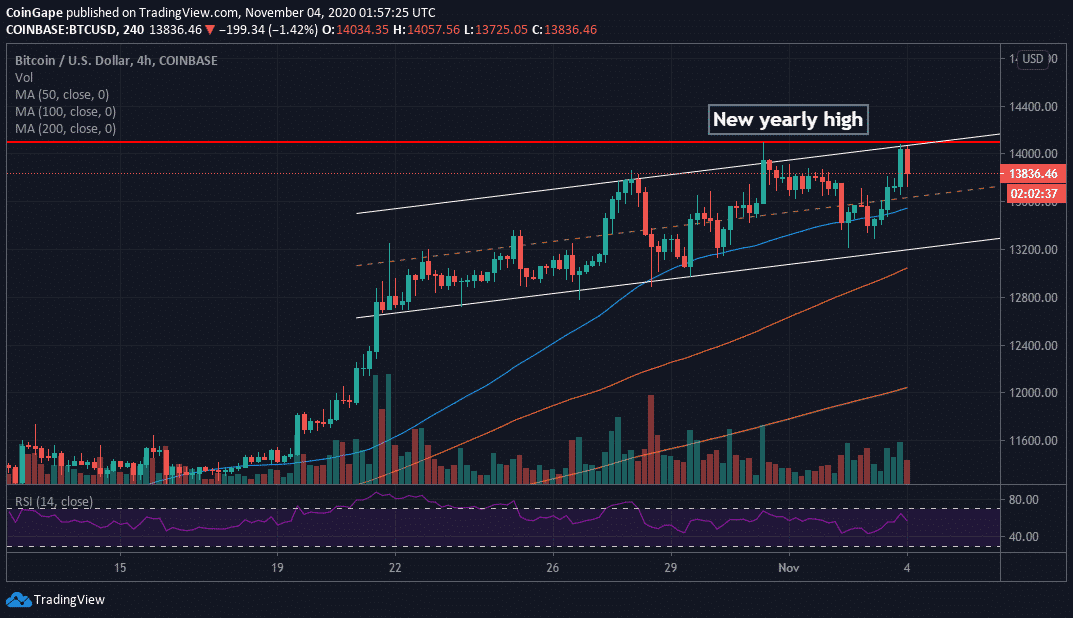 Bitcoin price retested $13,200 support on Tuesday in the wake of the news that cryptocurrency exchanges operating in Hong Kong will soon be regulated. The entire cryptocurrency market turned bearish, led by BTC’s plunge under $13,500. For instance, Ethereum dropped sharply to $370, while Ripple refreshed the buyer congestion at $0.23.

The flagship cryptocurrency did not stay down for long as it soon embarked on an upward roll. BTC/USD climbed above the 50 Simple Moving Average (SMA) before taking down the resistance at the ascending parallel channel’s middle boundary. The bullish price action continued, allowing the king of digital assets to sit above $14,000.

However, the new yearly high at $14,100 turned out to be a solid seller congestion zone. Therefore, a reversal ensued, which sent BTC towards an ascending channel’s middle boundary.

Bitcoin is trading at $13,840 at the time of writing. The least resistance path is downwards, especially with the Relative Strength Index (RSI) diving to the midline. Apart from the channel’s middle layer support, BTC/USD is likely to seek refuge at the 50 SMA in the 4-hour timeframe, in the vent declines progress.

The critical support at $13,200 is strong enough to hold the bellwether cryptocurrency from plunging underneath $13,000. Besides, the 100 SMA will be used as the last resort to avert losses eyeing the next formidable support anchor at $12,800.

It is worth mentioning that the bearish update outlook will be invalidated if Bitcoin resumes the uptrend and settles above $14,000. Another majestic breakout past the yearly high would set BTC on the trajectory to $15,000.

The post Bitcoin Technical Analysis: BTC Struggles With The Stubborn Resistance At $14,000 appeared first on Coingape.

Venezuela to Incorporate Bitcoin and Litecoin Wallets into National Remittances...

Has the Rug Been Pulled on Shroom Finance as Tokens Dump...

ETH Supply in Smart Contracts Leads That on Exchanges With...

Regulatory Clean-Up Can Be Good For The Crypto Market –...